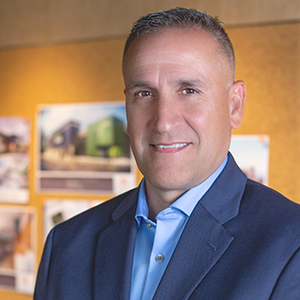 Robert Schunke was just a boy when he took the job at Somerville.

Technically, it hadn’t been offered yet. But even as a child, Robert knew Somerville was where he wanted to work. His family drove through Green Bay frequently from their home in Kewaunee while Robert was growing up, and he admired the Somerville building along Riverside Drive, determining that someday he’d put his love for drawing and architecture to work there.

Robert proceeded to get his degree in architectural technology and work in the Fox Valley and the Green Bay area before reconnecting with the company he had admired as a youth. He joined the team in 1988, and it was everything he had hoped.

Robert takes a design through the building process, creates the construction documents, and coordinates with the other disciplines involved. It’s the collaboration with talented colleagues that he appreciates most about Somerville. The culture of the workplace and its reputation for quality are among the characteristics that have kept him with the company for decades. Close partnerships and long-term relationships with organizations including Bellin Health and Northcentral Technical College have allowed him to forge the type of bond he values having with his clients.

But the best part is seeing the work come together – the pieces of a building, like a puzzle, joined together. It’s driving through town and pointing out to his own children the buildings he’s been fortunate enough to work on, for a company he’s always known he would be with.