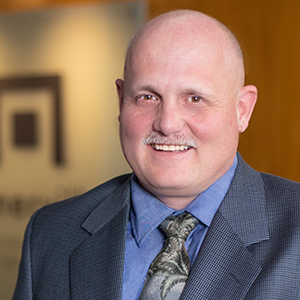 Stacy Mosher’s path to Somerville was an unconventional one. He has always enjoyed drawing buildings, but he tried his hand in distinctly different areas — playing college baseball and working as a chef – before pursuing a career in his longtime hobby.

Today he still cooks and has transitioned from player to coach. But he’s all in when it comes to creating the building a client needs.

Stacy started at Somerville as a plot room assistant in 1993, beginning what would be a career of working hard and learning new skills in order to continue moving through the ranks. He used each role as a chance to expand his knowledge, and each time a job opportunity opened, he made the move. When the pace of his work allowed, he’d help out in other areas, adding to his versatility.

The schooling he pursued incorporated all disciplines, giving him a broad foundation as a starting point. Today, he can work in HVAC, plumbing, fire protection, and a number of other areas, but electrical work is in his wheelhouse. With a track record of accuracy, reliability and the initiative to get the job done well and on time, he sees projects through as long as changes need to be made, then jumps in where next needed.

That’s the work environment he appreciates – having his hands in myriad projects. The employee-owned nature of Somerville’s operations makes him more invested in the business.

Electrical was his first opportunity, and he jumped at it. Since then, he’s been moving up and moving forward.