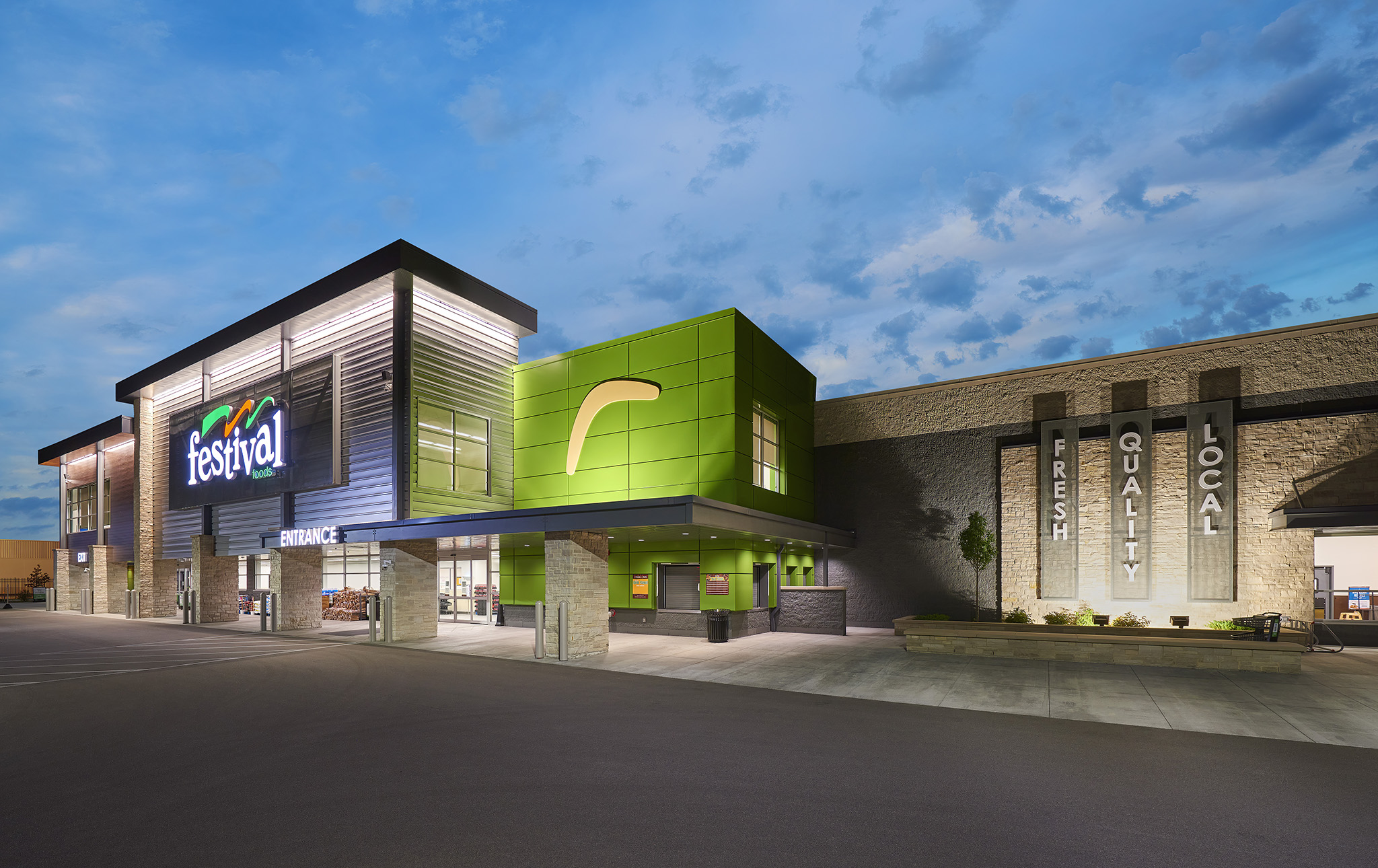 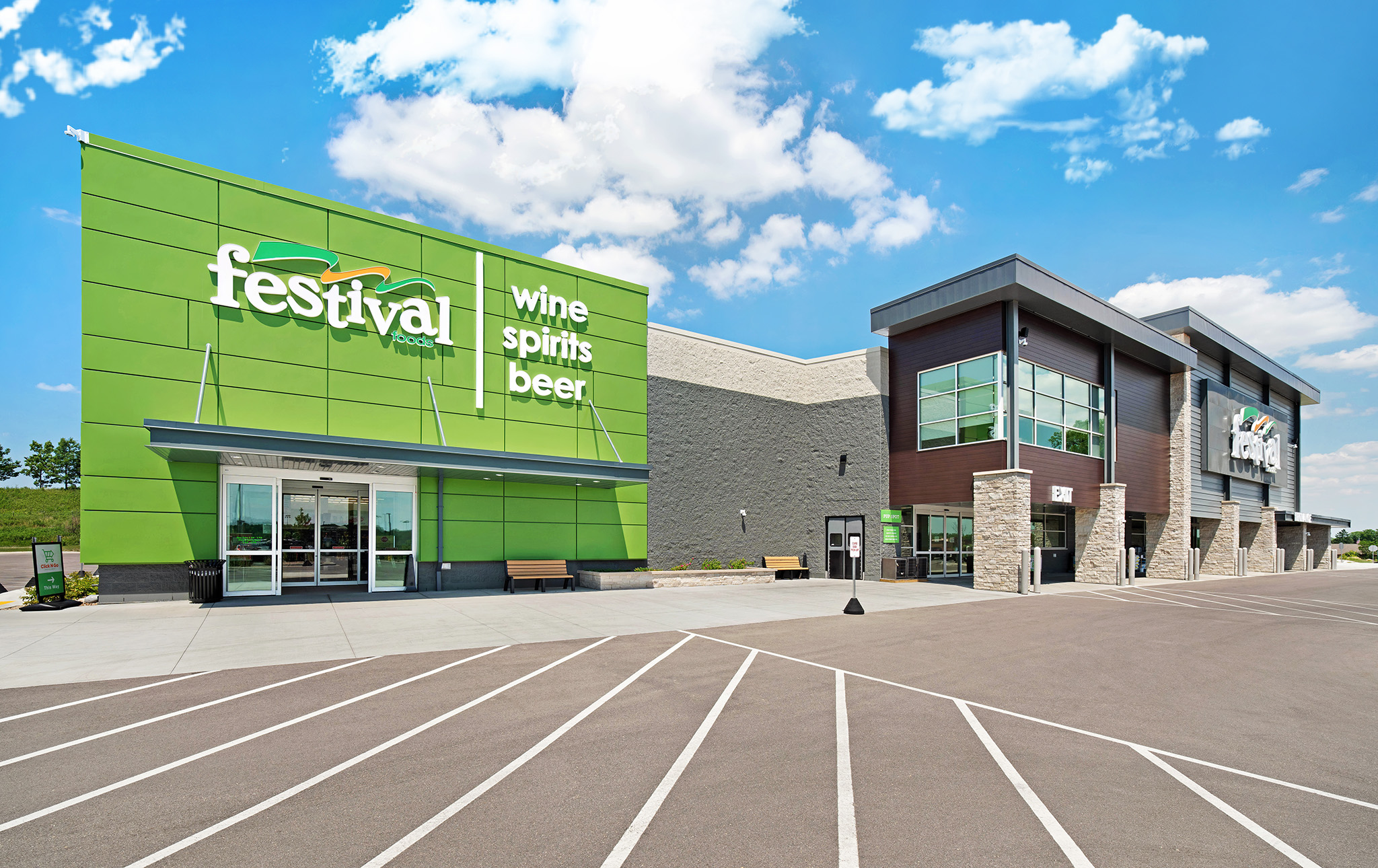 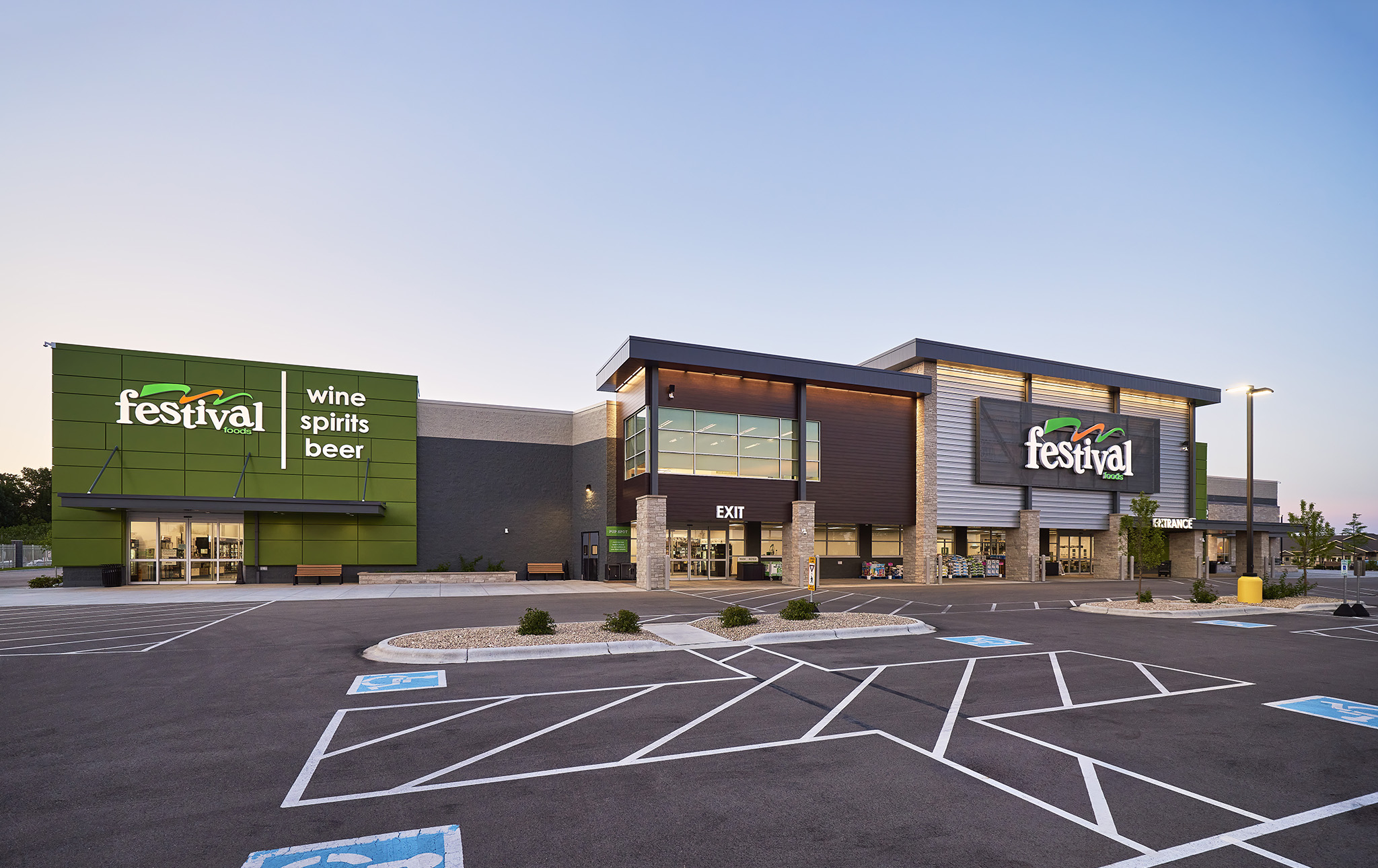 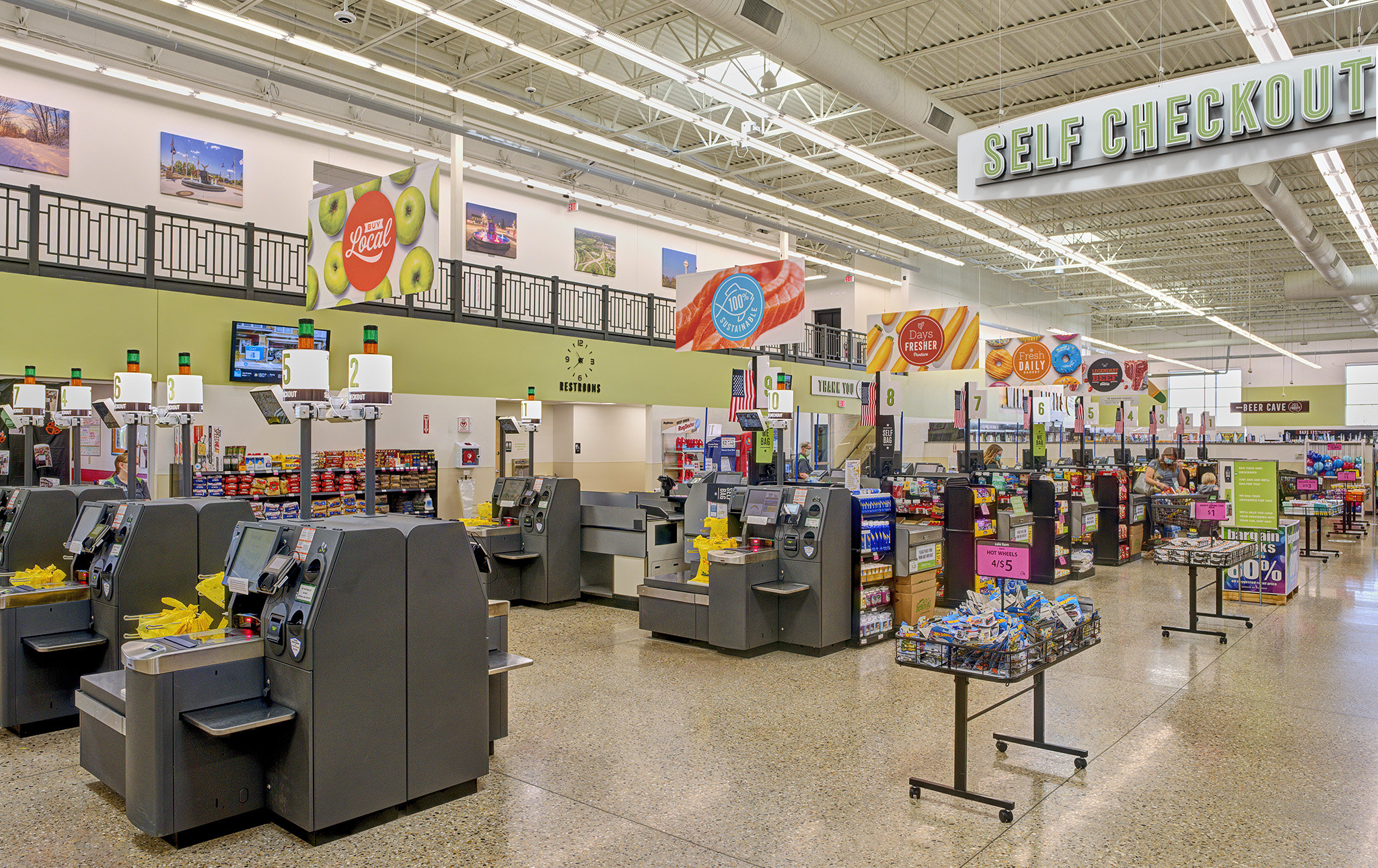 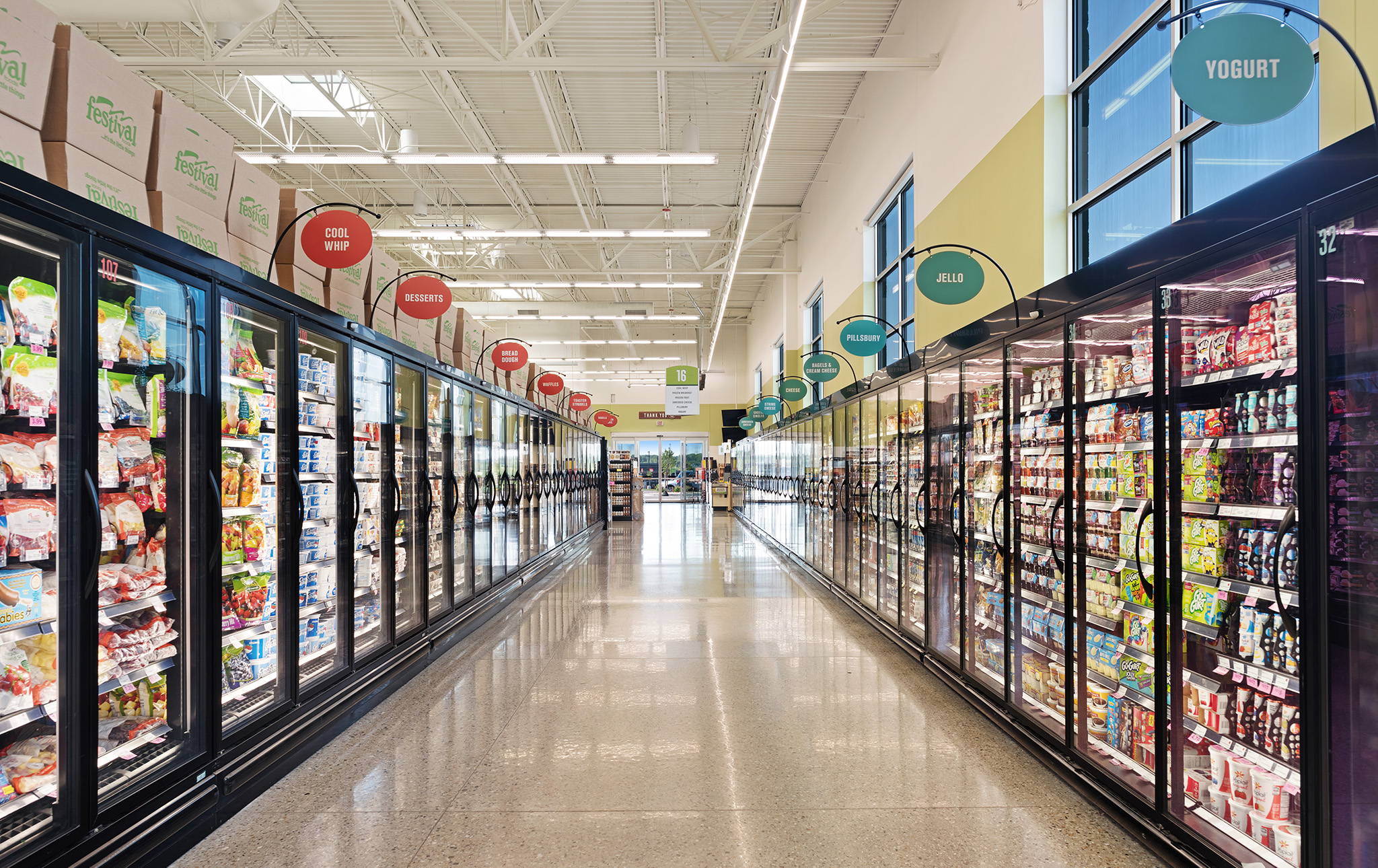 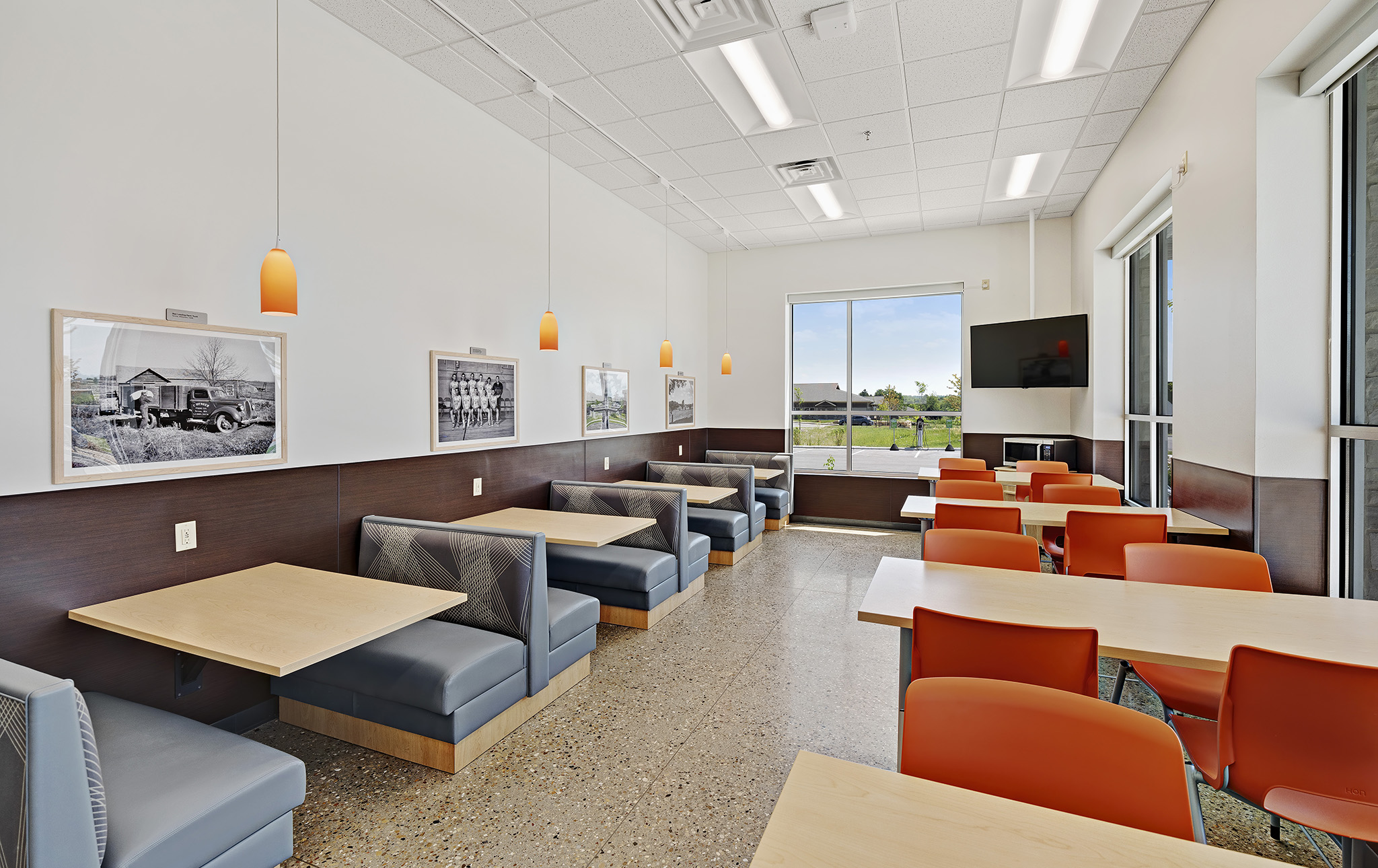 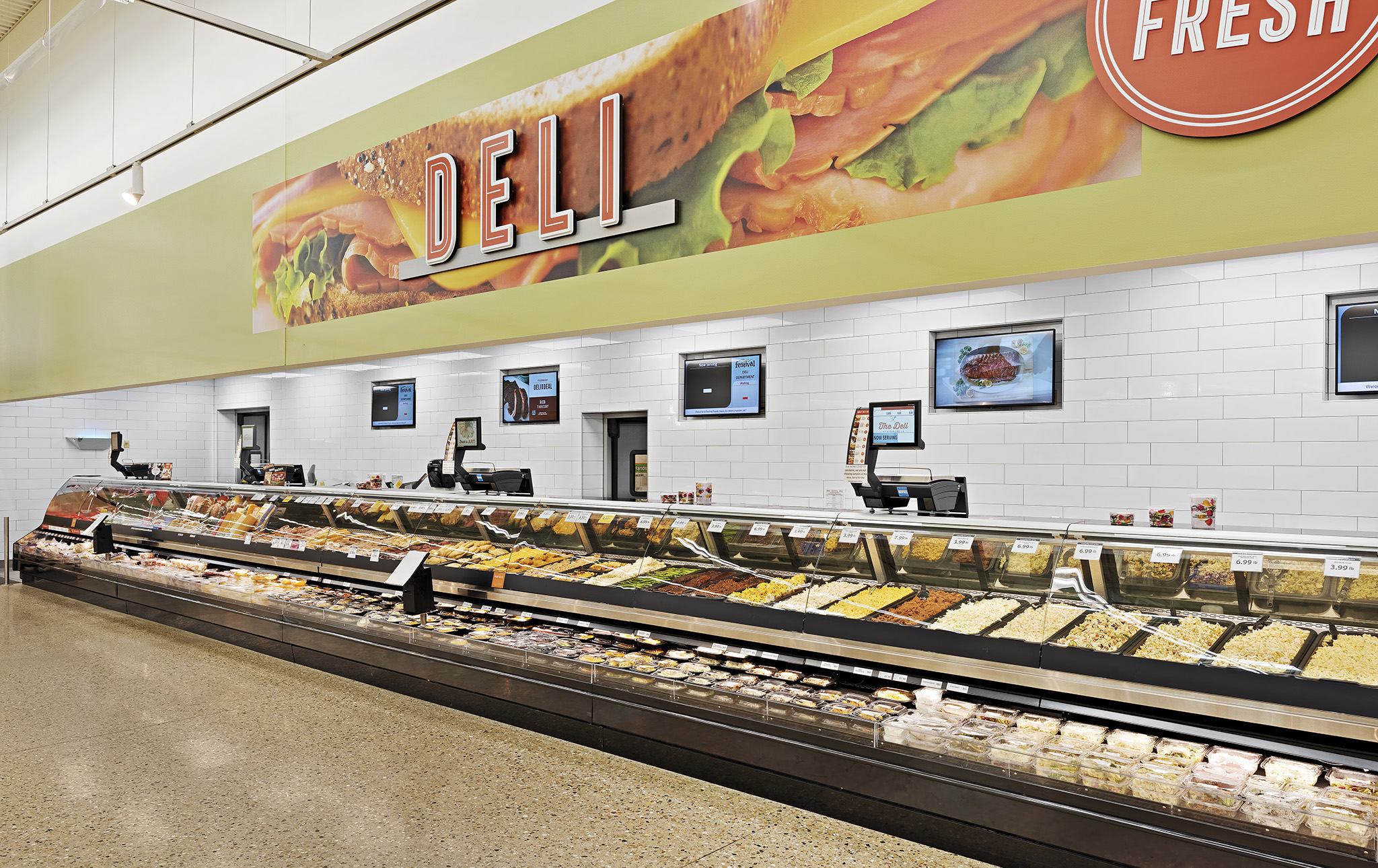 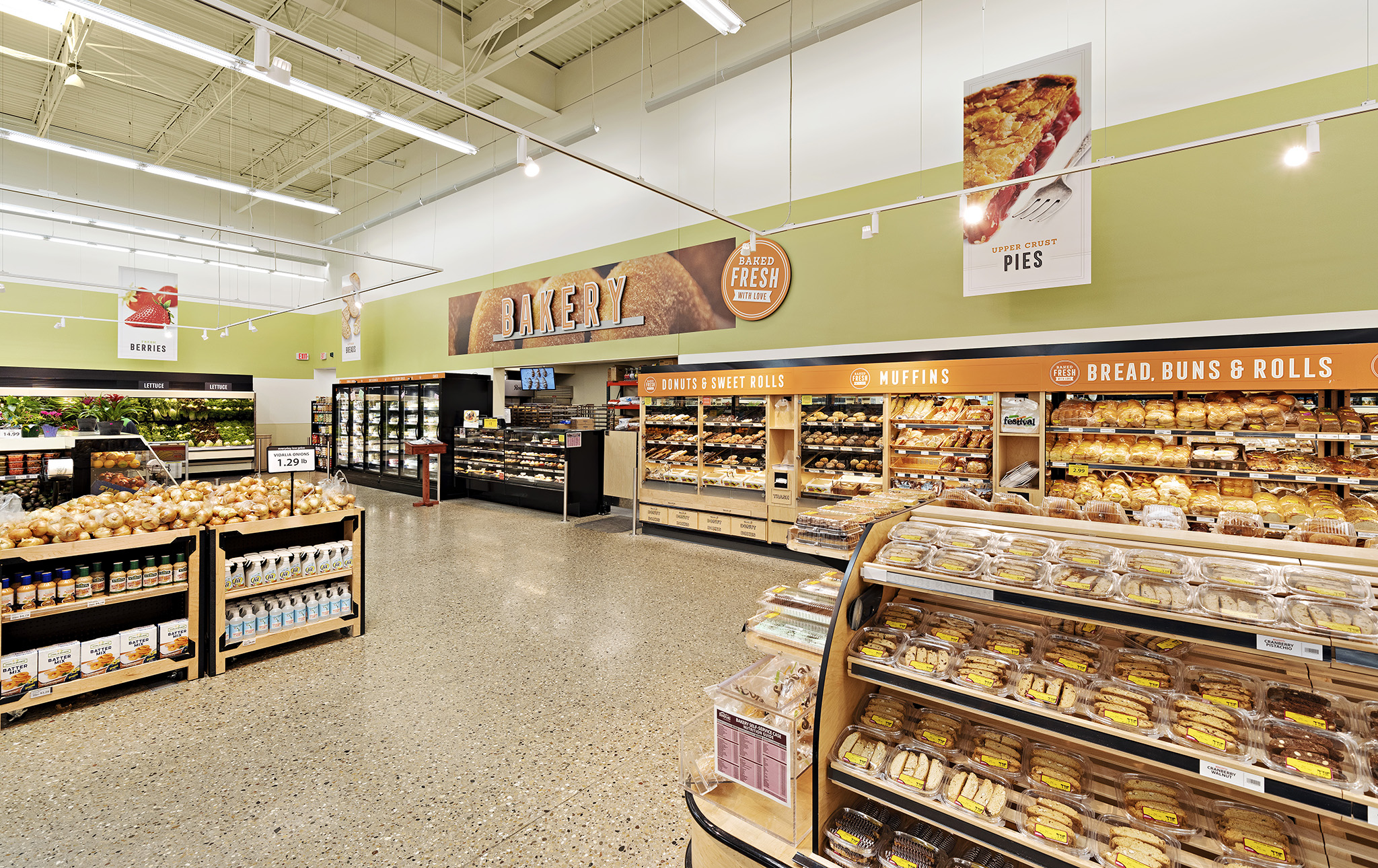 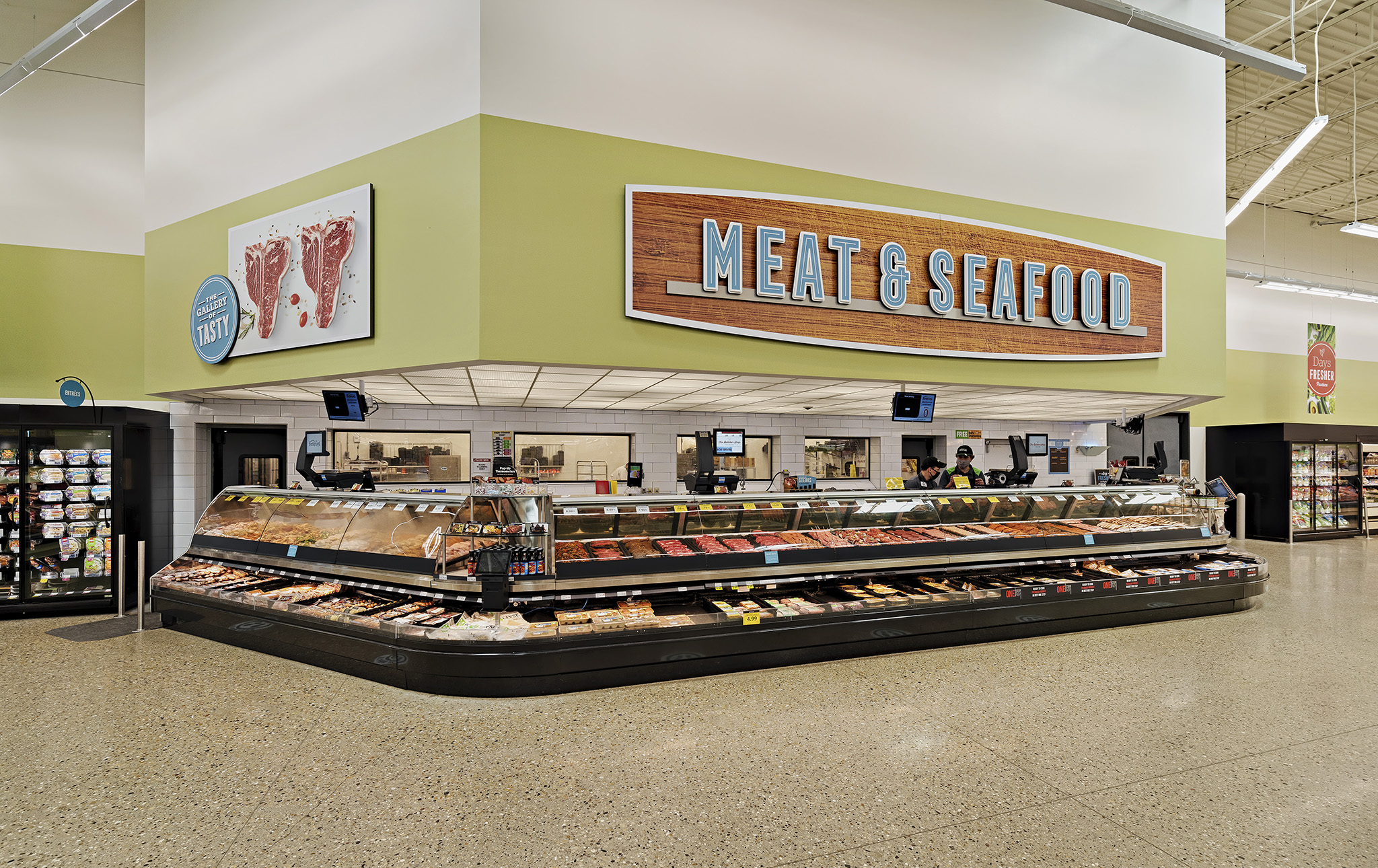 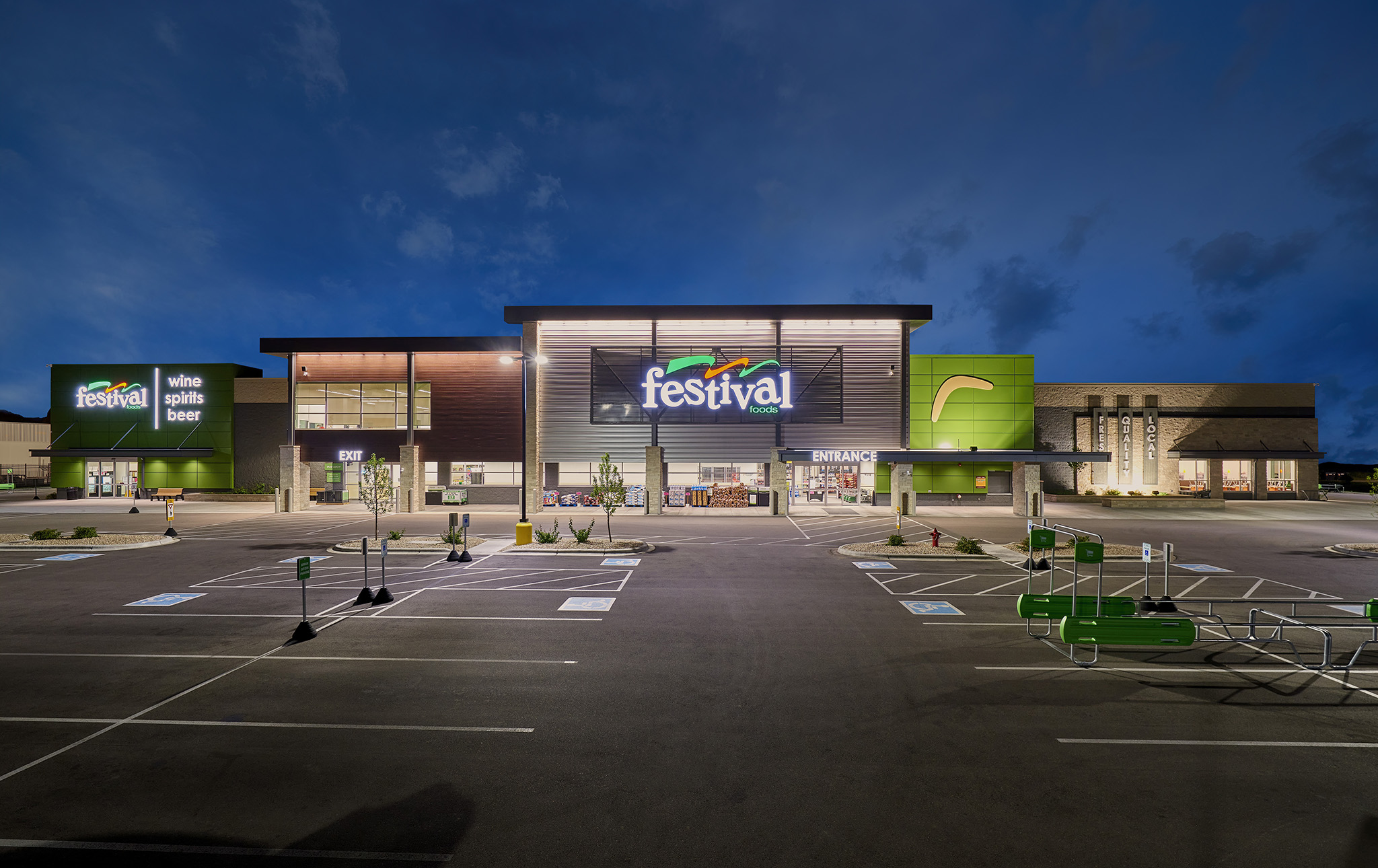 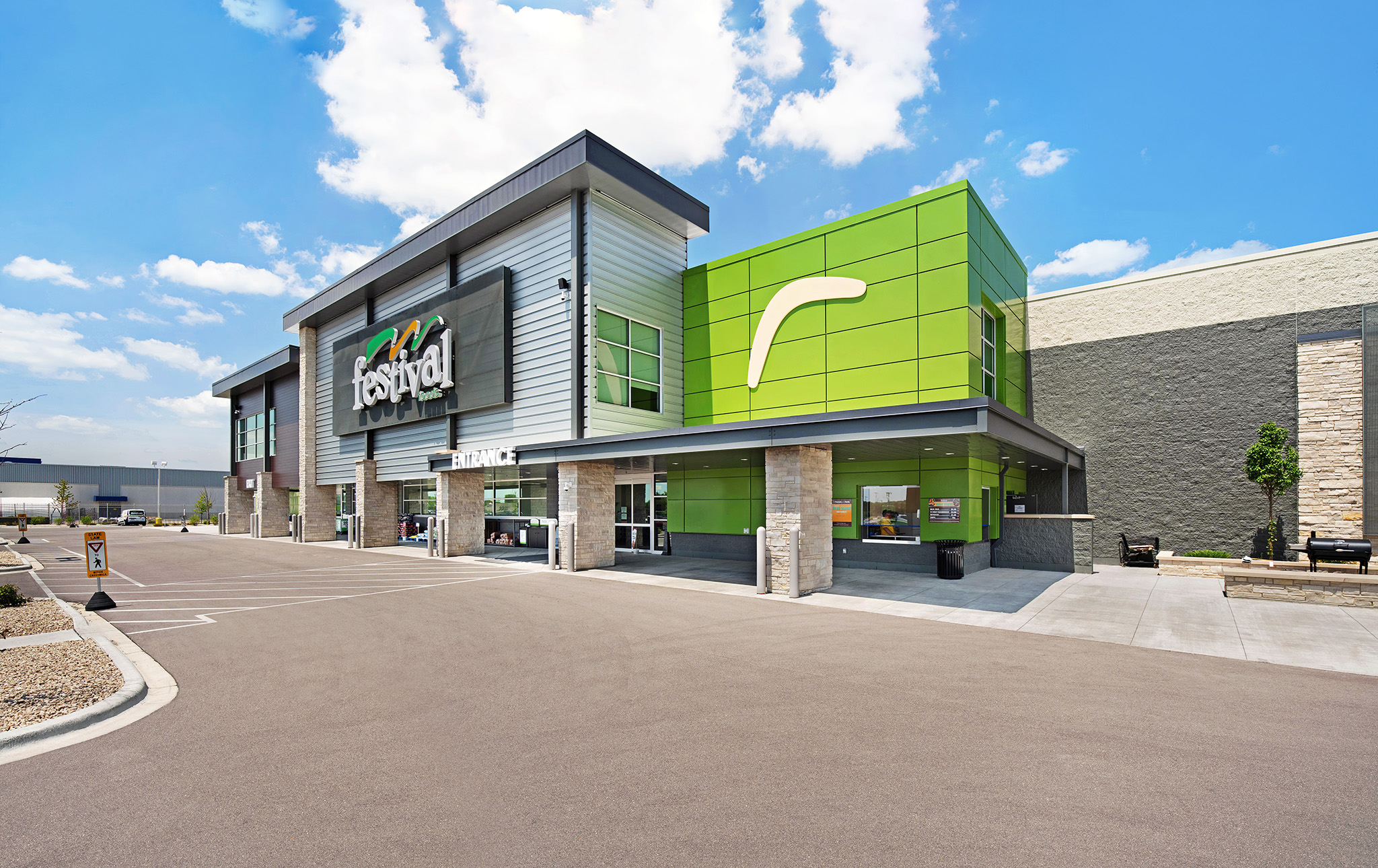 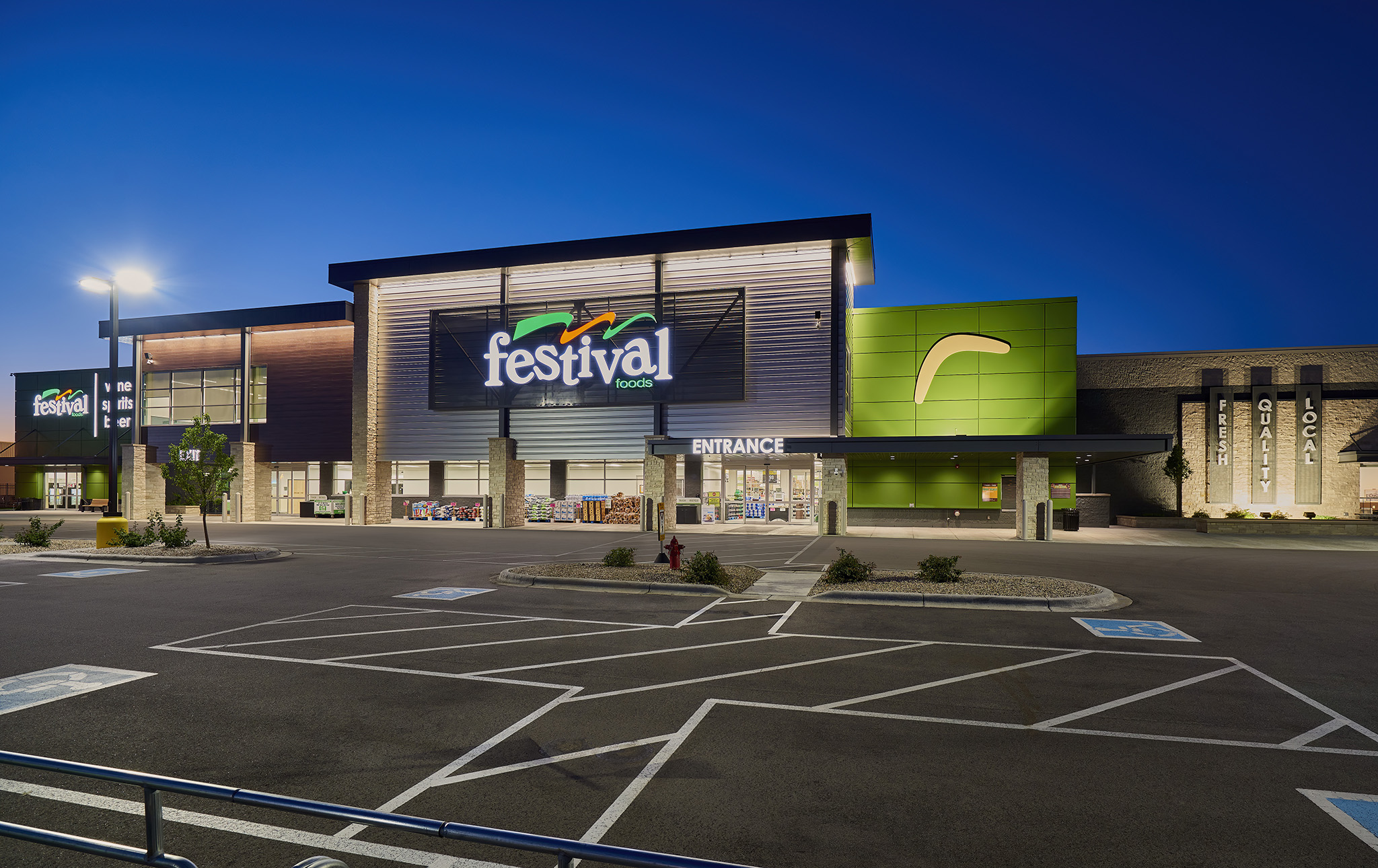 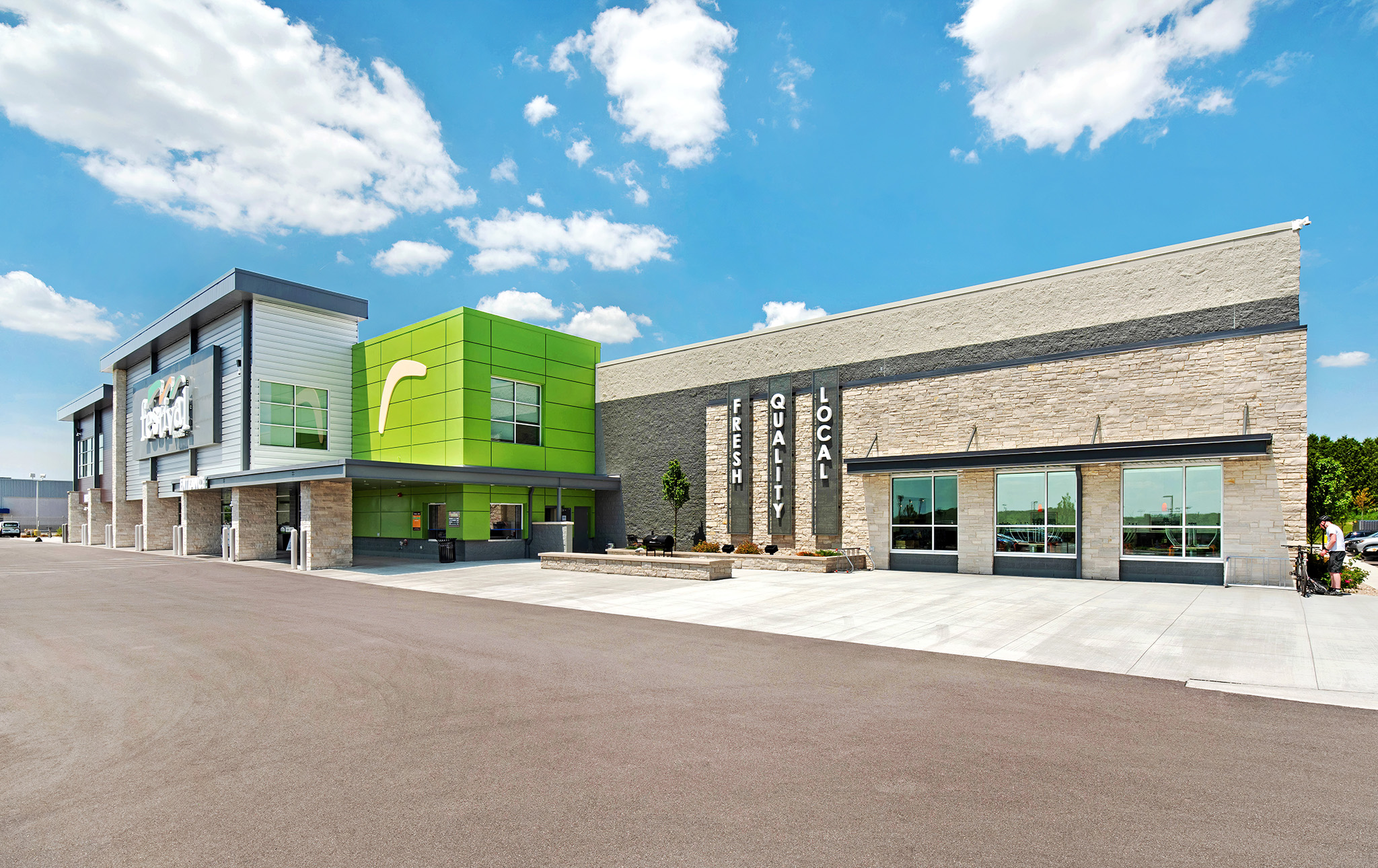 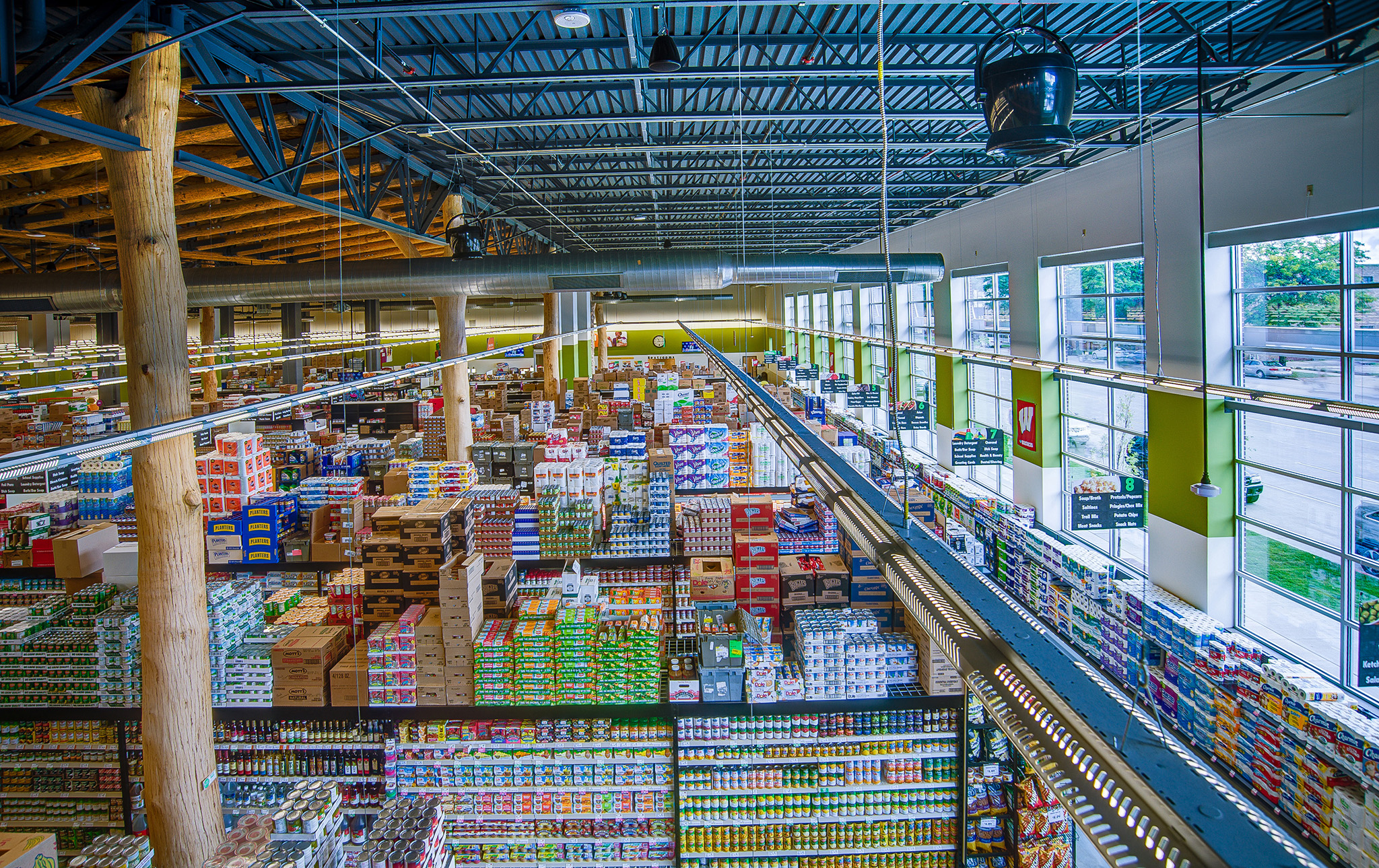 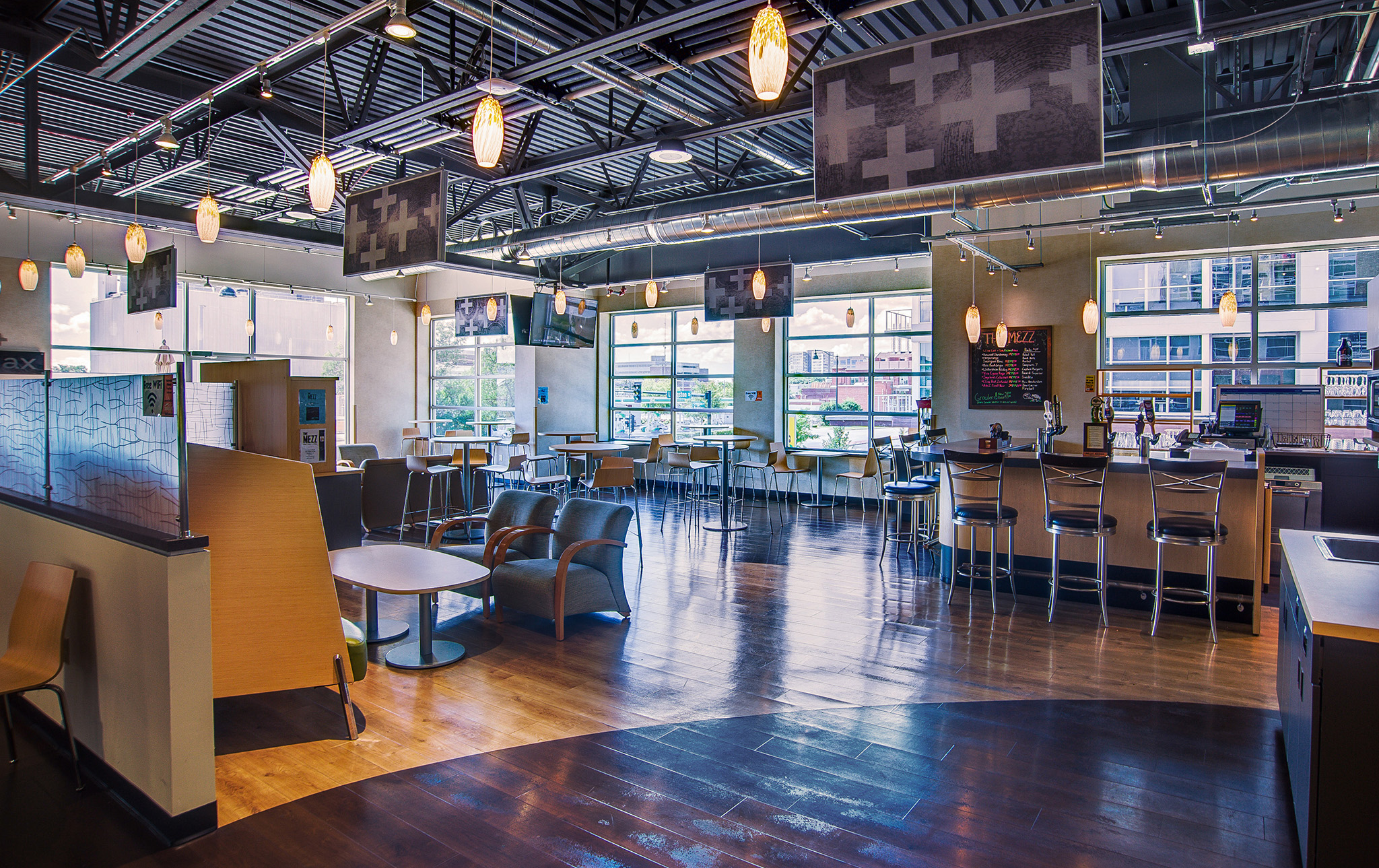 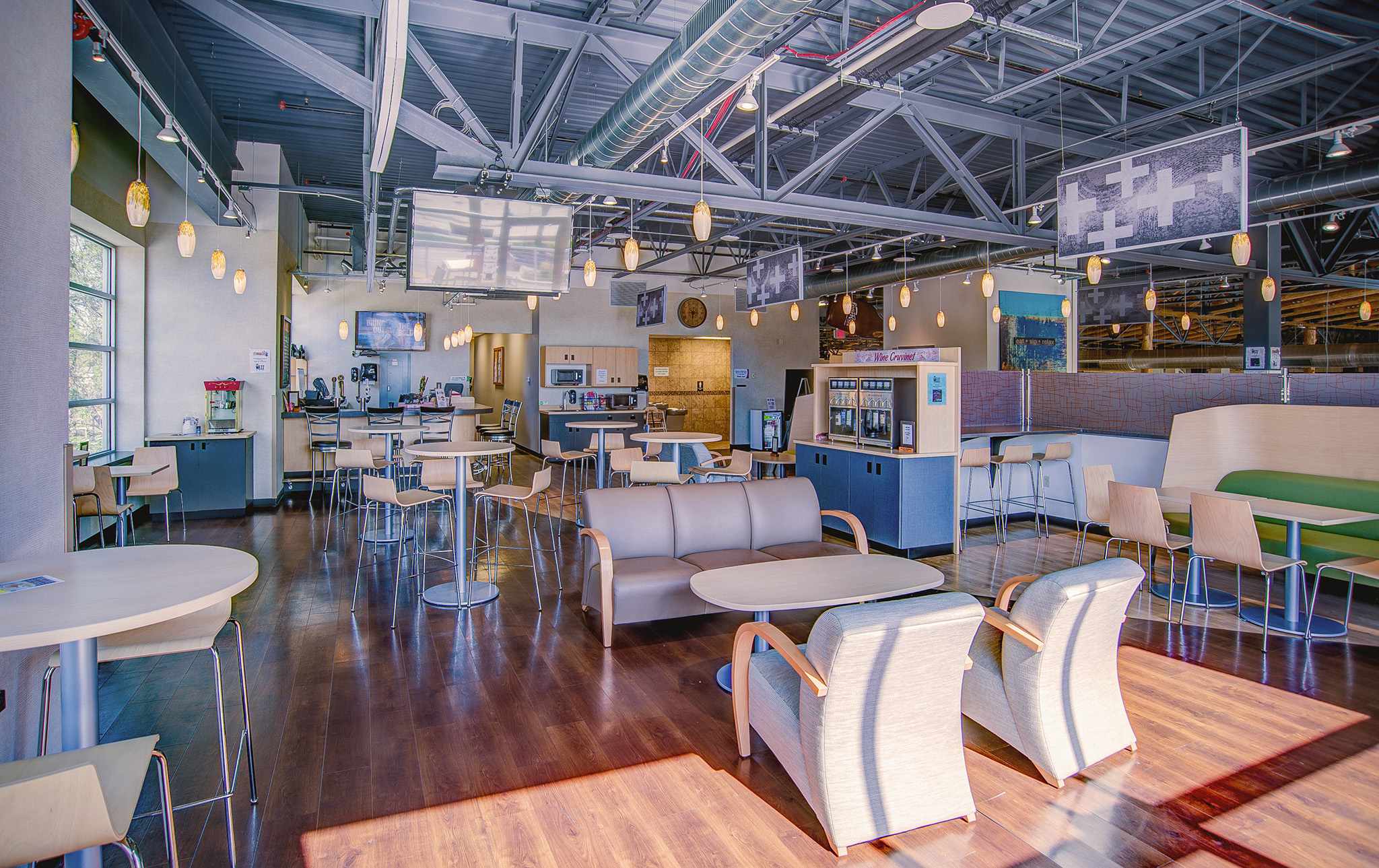 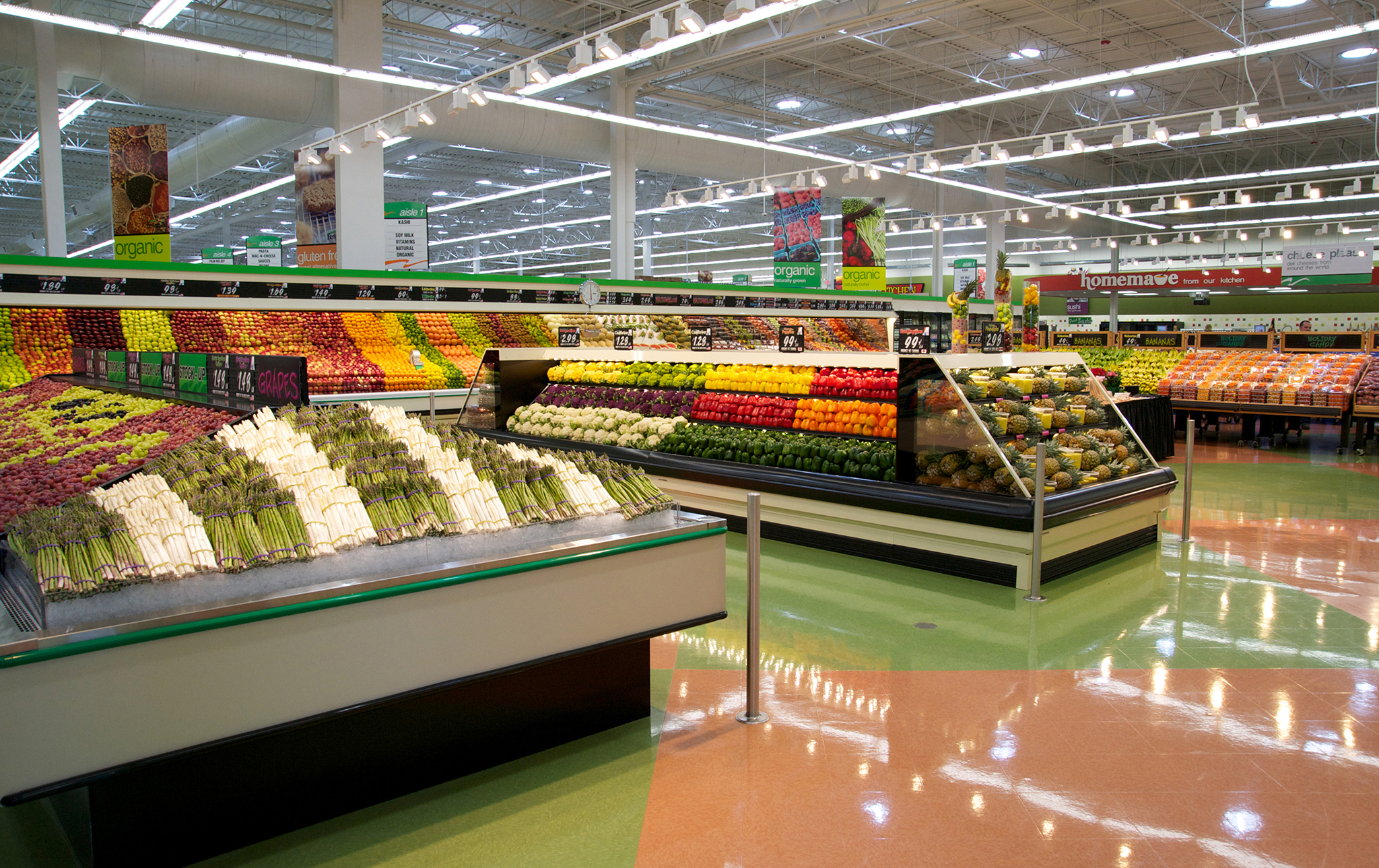 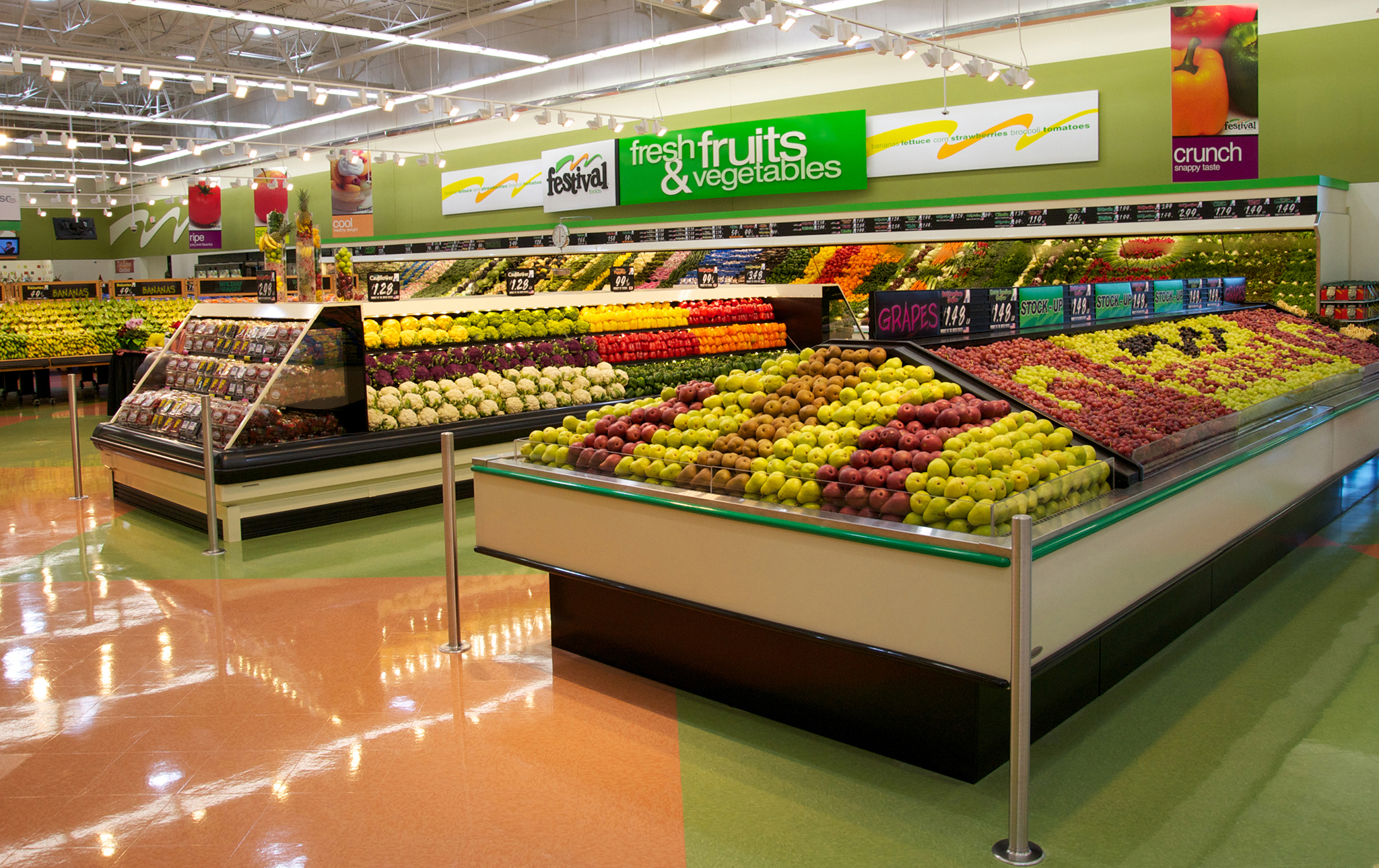 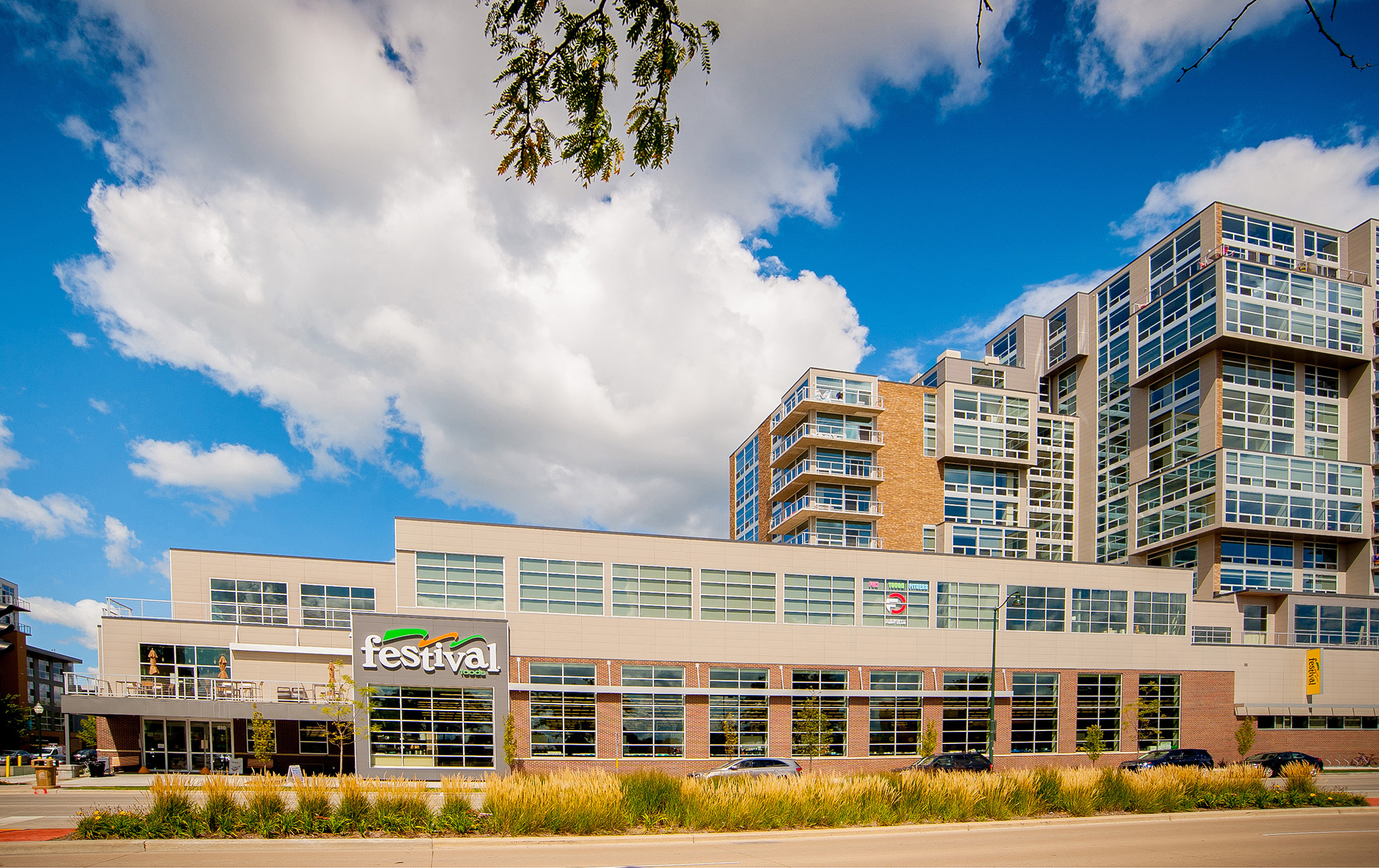 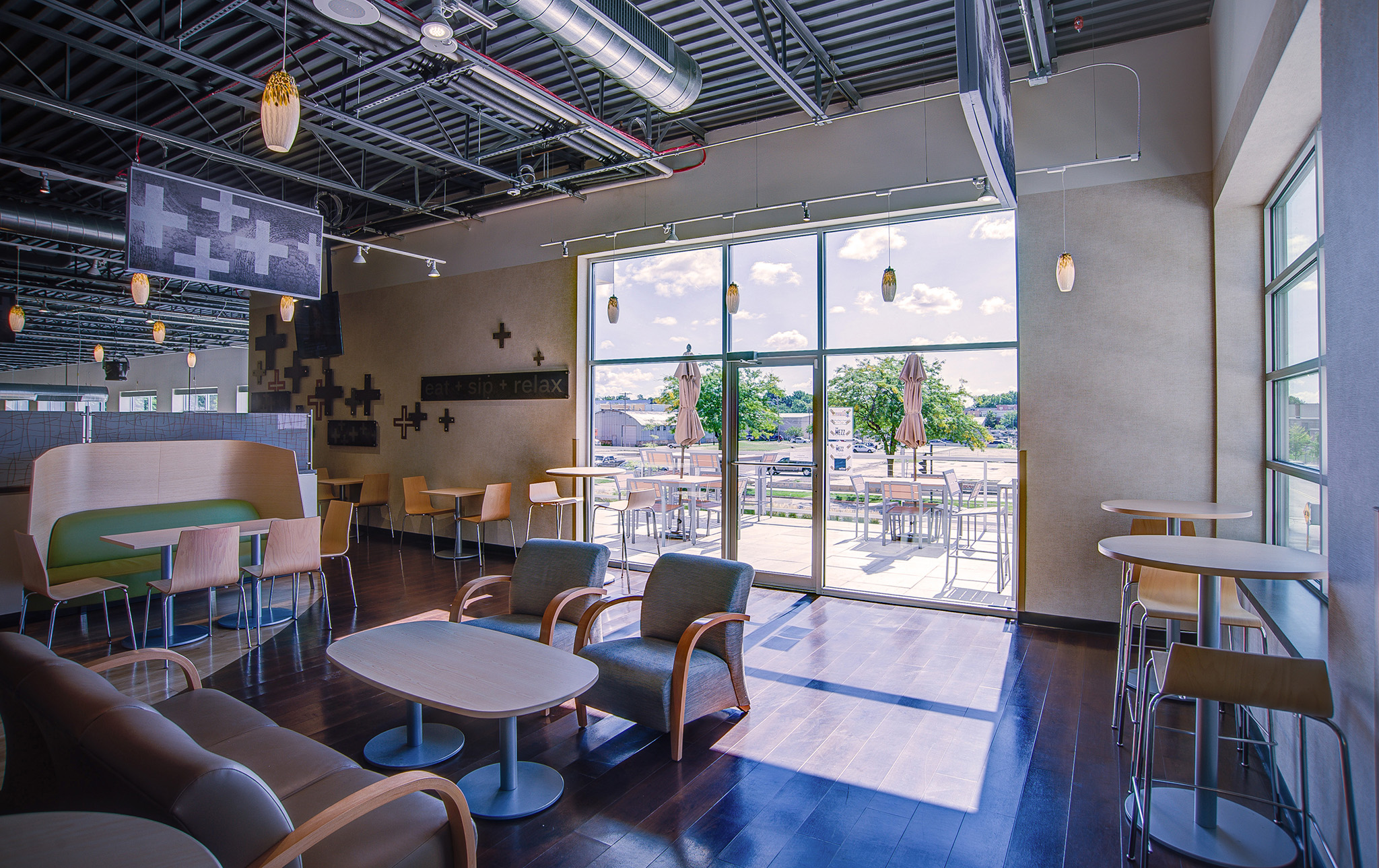 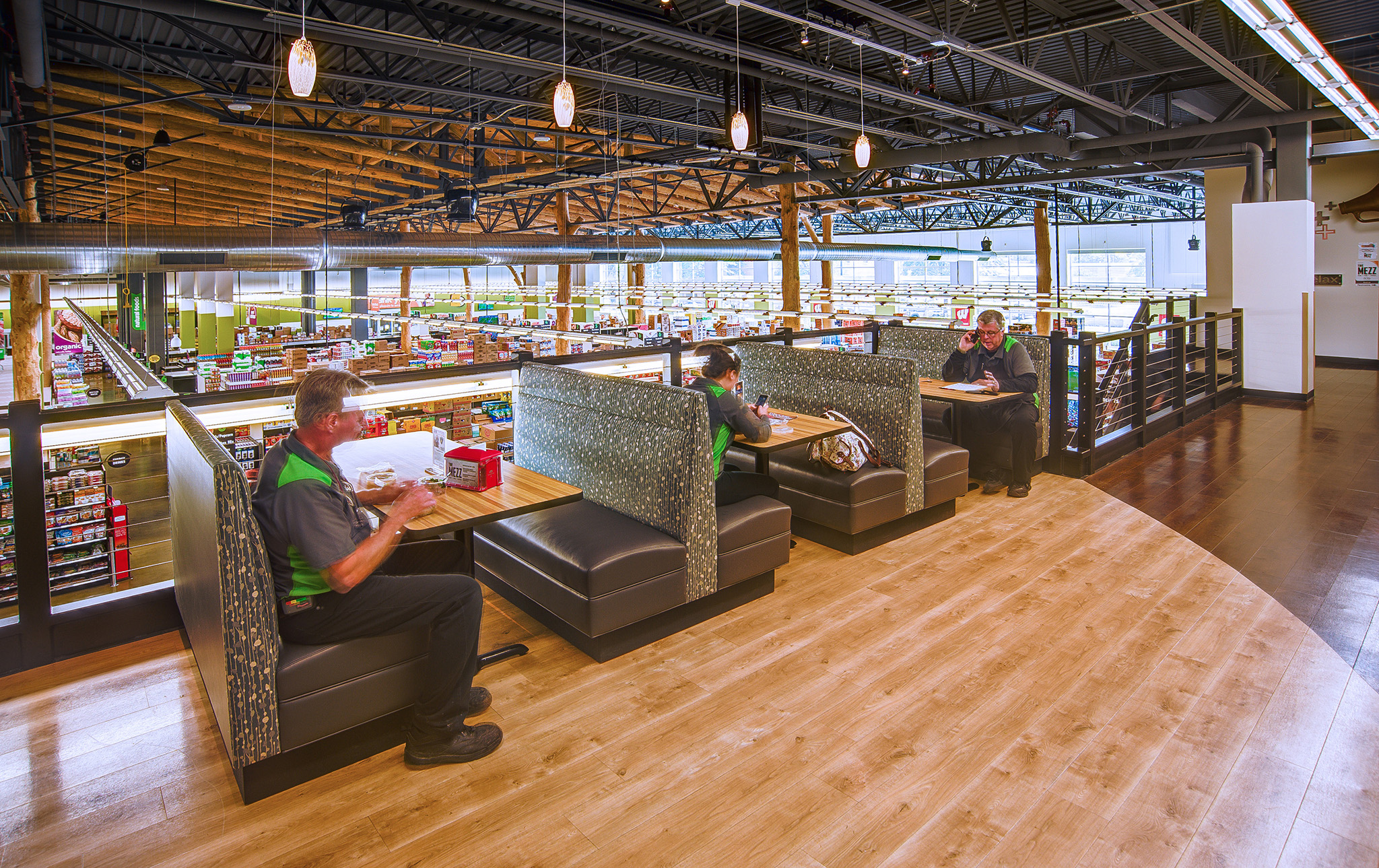 Sometimes the best things happen when you least expect them.

And sometimes, the best changes are the ones you didn’t even realize you needed.

Festival Foods wasn’t searching for a transformative new look. The Festival Foods team wasn’t sharing a list of needs or brainstorming options for a revamped exterior. Subtle change is what they thought they needed.

But in a 10-year relationship, you get to know each other pretty well. And after providing architectural services for their stores since 2010, Somerville’s architects recognized an opportunity for an upgrade for the family- and employee-owned retailer.

The Somerville and Festival Foods partnership began in 2010 and has included projects throughout Wisconsin.

Originally working with an established prototype, Somerville would replicate the building’s aesthetic with some site-specific adjustments.

The triangular peak and rainbow metal panel storefront, with a painted exterior and traditional detailing, was a standard look.

Festival Foods recognized that the store exteriors were becoming a bit dated and were no longer in keeping with where their competitors were heading. Their initial plan to update the stores was limited to replacing the rainbow colors out front and maintaining the traditional shapes, forms and symmetry.

That plan threatened to be a short-term solution to a tired appearance, and Somerville’s team recognized an opportunity to take what they had learned about Festival Foods’ needs and preferences over the years to introduce a new look and feel to the company’s stores.

It was time for a more current design. A more contemporary feel.

Without significantly changing the proven footprint of the store, Somerville maintained its functional elements. The team simplified the exterior, incorporating modern massing and materials, bringing in more of the greens and charcoal grays used inside the stores to better highlight the company brand.

“It’s an update or a refresh that they didn’t exactly ask for, and they didn’t really understand how much they needed it until they saw it,” said Somerville architect Neil Yunk. Somerville typically spends hours in design meetings, trades multiple iterations of ideas with the client and shares examples throughout a lengthy process.

Instead, encouraged that Festival Foods had long been receptive to new ideas and trusted their work, the Somerville team – back in the studio and unbeknownst to Festival – invested their skills and experience to create a concept that has become a prototype to grow Festival Foods with a more modern, leading-edge appearance. Now that’s value-added.

Festival Foods, which believes in continuous improvement of store features and has always welcomed input on work at its stores, liked what they saw. Leadership embraced the opportunity for a next-level upgrade that enhances guests’ experience and contributes fresh features to the familiar layout.

In collaboration with Festival’s Store Planning Senior Director and store planning team, the design was well-received by the leadership group, in part thanks to a relationship that had always brought the best for the client. They were able to move forward a prototype that was conceptually unique and progressive.

The prototype was first applied to a new store build in Verona and in Hales Corners soon thereafter. The previous symmetrical entry facade was scrapped in favor of emphasis on a larger front element in silver that creates a stronger branding opportunity and front-facing signage that plays up the store’s name. The new look better blends the interior of the store with a simplified exterior. Cleaner and crisper forms. Simpler massing. Natural stone, and metal panels with a warm, welcoming wood appearance.

“From the beginning, it has been clear that Festival Foods’ vision and values are in line with Somerville’s, which makes for a natural and deep partnership,” Yunk said, noting that the company contributes to the communities it joins and engages with the community in each of its numerous locations.

“The biggest thing for me working with Festival is seeing how much they care about the community they’re going into,” he said.

Somerville and Festival Foods have long worked to create groundbreaking stores with meaningful features that make each location unique.

An urban touch brought to life a store on the ground floor of the Galaxie Building in Madison in 2016, where the city’s campaign against the invasive Emerald Ash Borer allowed the harvesting of local ash trees to be repurposed as the store’s support structure.

The relationship is built on trust that fosters a give-and-take of ideas. Both sides learn best practices through the process, share knowledge, brainstorm ideas and challenge each other to think in new and unique ways. The teams respect each other’s expertise, which creates a special space for innovation and fresh perspective.

With this more forward-looking design Festival Foods is on the cusp of a successful brand transition. Somerville was willing and able to take it a step further – to show Festival Foods what could be.