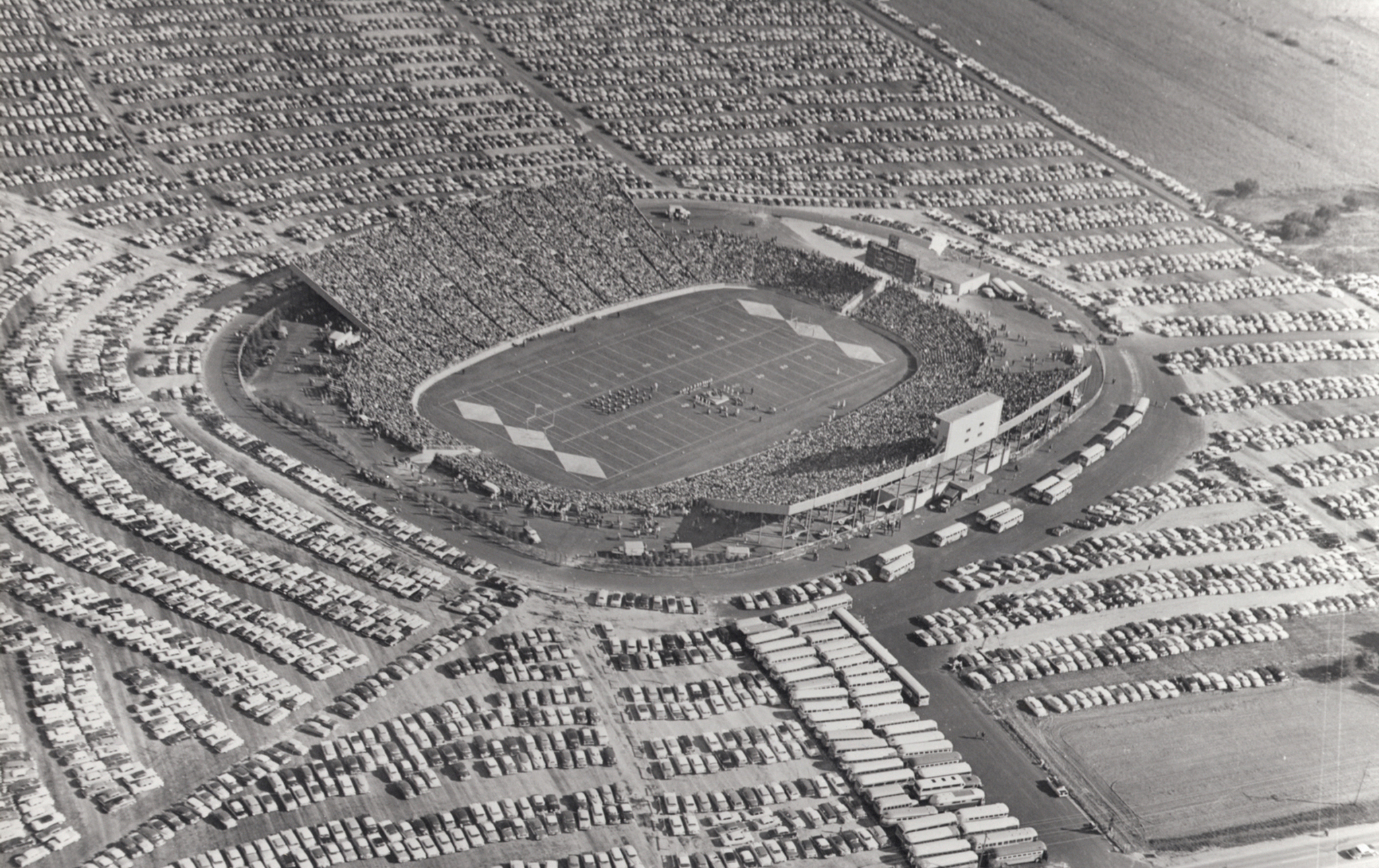 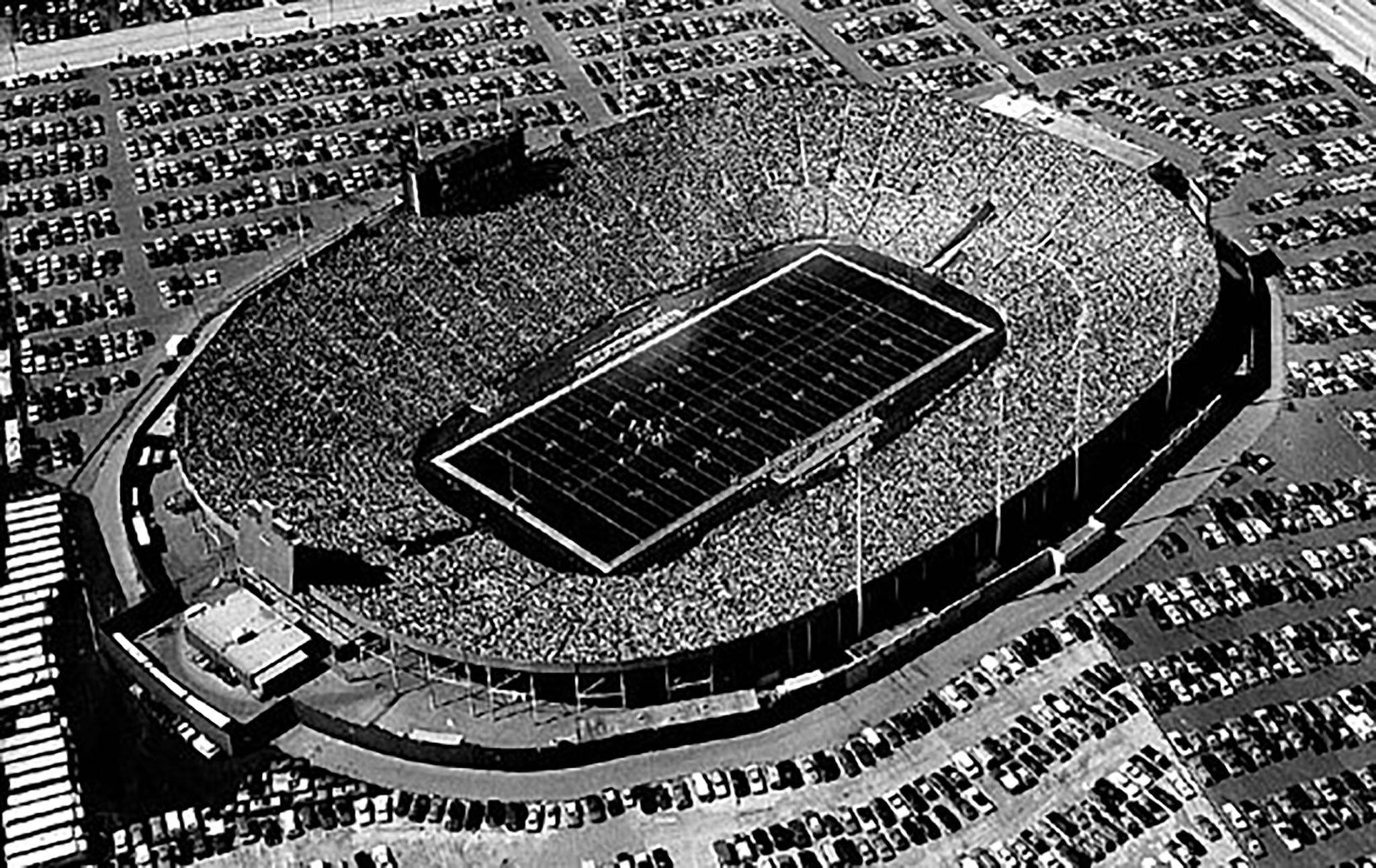 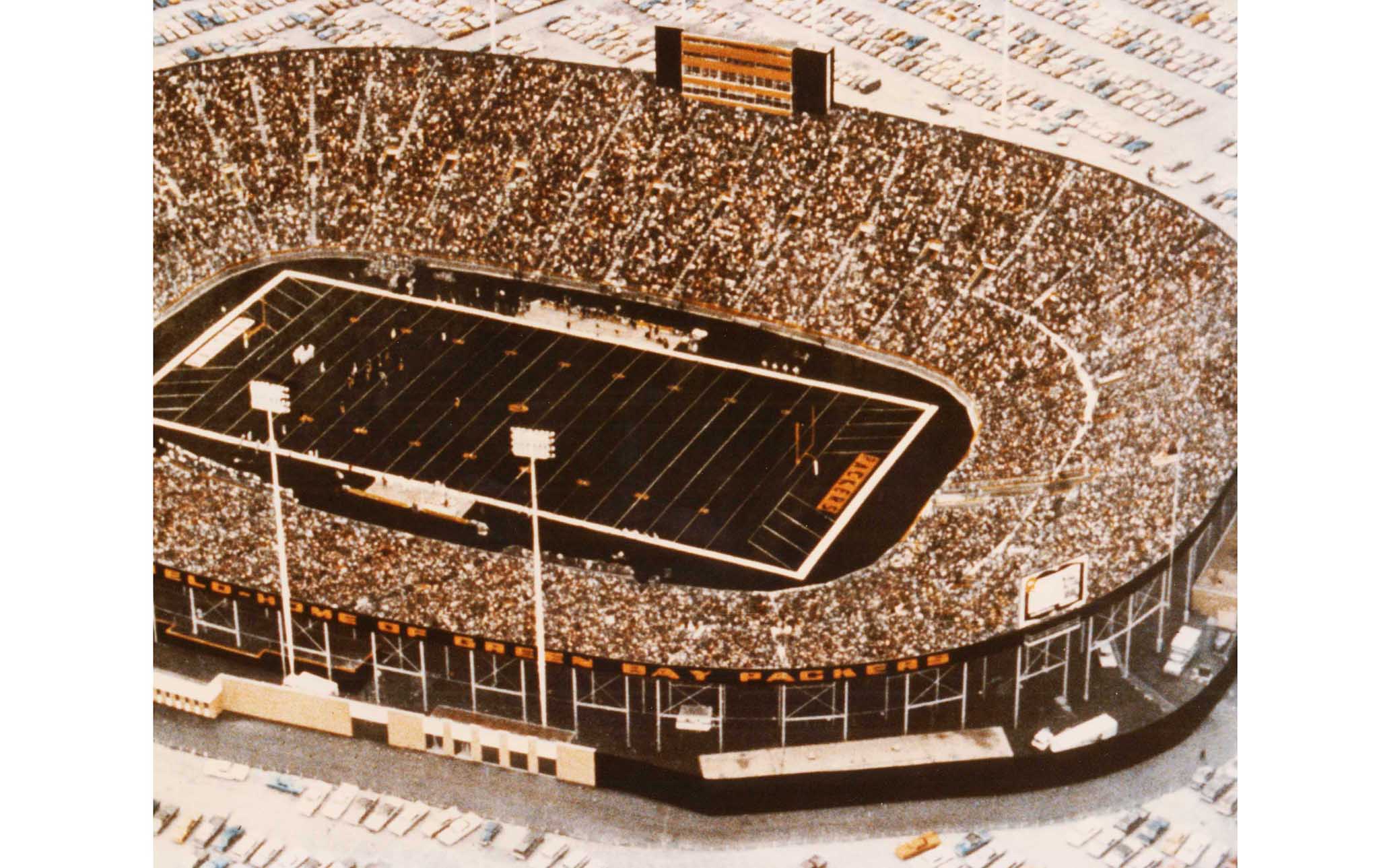 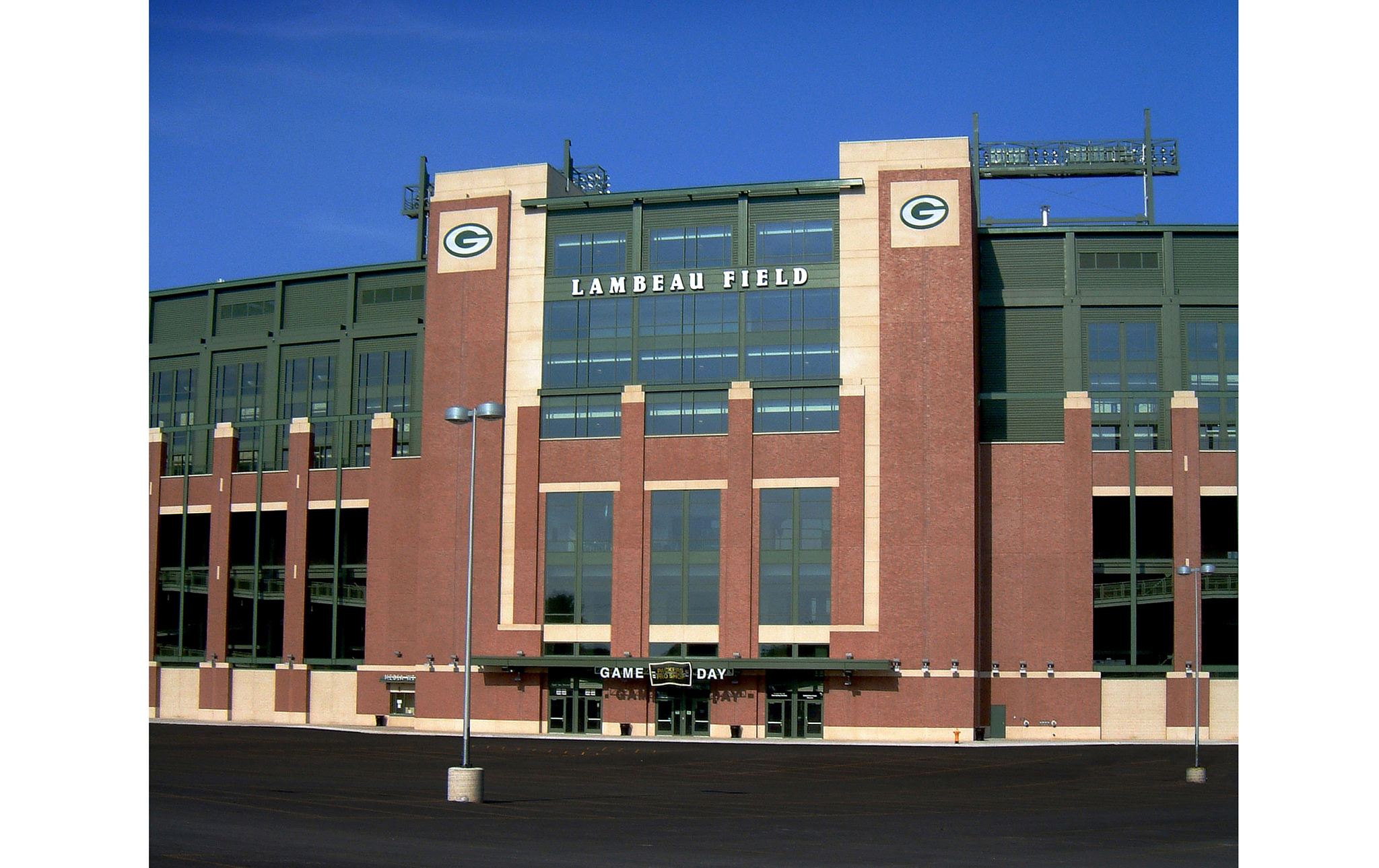 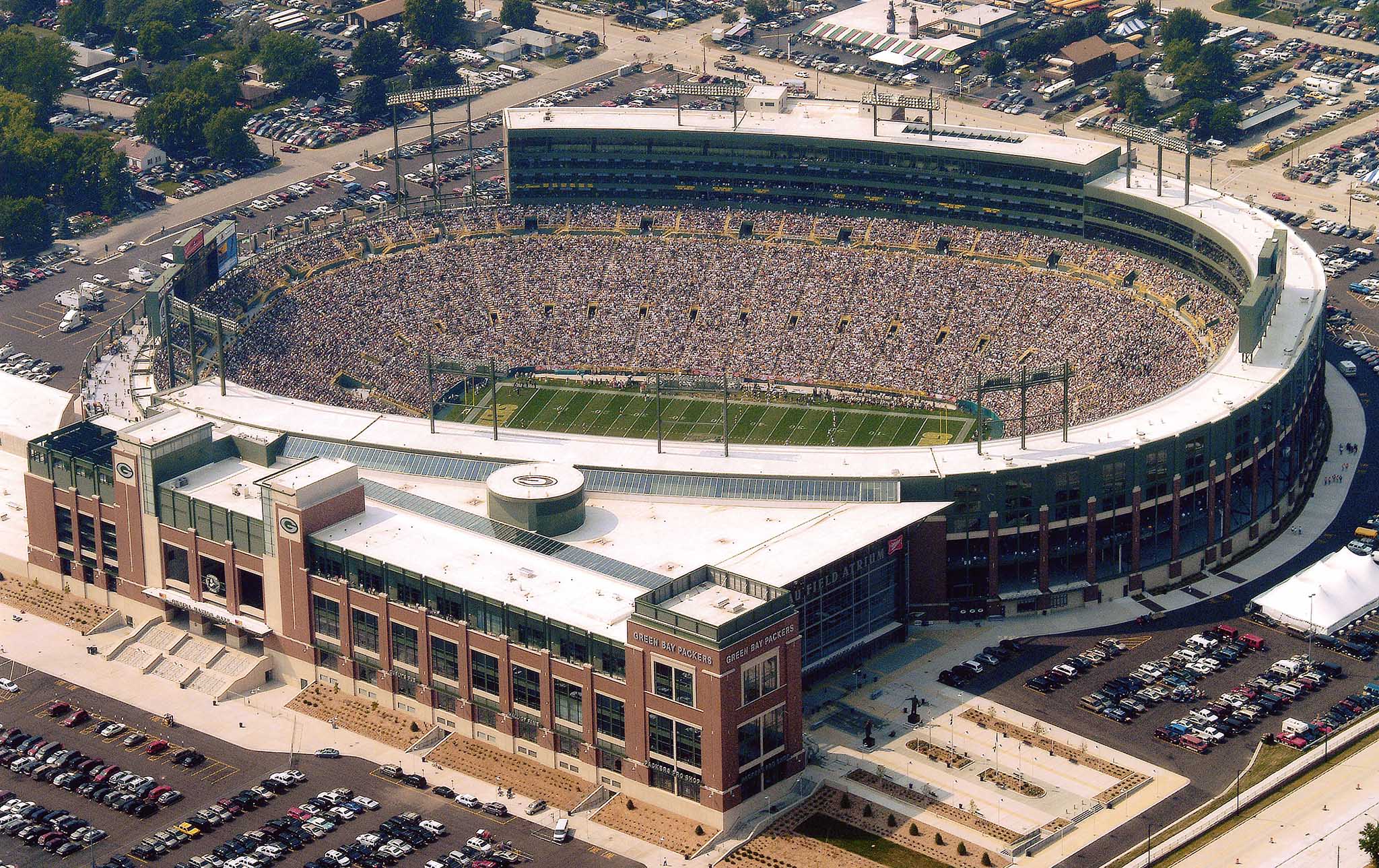 In 1955, Green Bay city leaders announced plans to build a new home for their beloved football team, the Green Bay Packers. They pictured a stadium seating 30,000 fans with the flexibility to be easily expanded if the need ever arose. To realize their vision, they selected the architectural firm, Somerville; and so began a winning partnership that would span more than half a century. Led by company owner and architect John E. Somerville, the firm and city worked together to select a sloping site that would facilitate the construction of a recessed elliptical bowl. After carefully studying the stadium at his alma mater, the University of Michigan, Somerville architect, Richard “Gus” Gustafson meticulously planned sightlines that would offer every fan a clear view of the action while creating an intimate experience that would bond fans and players alike. The stadium, originally named City Stadium, made its debut in 1957 to rave reviews– and a rousing Packers victory over the rival Chicago Bears, 21 -17.

In 1970, team and city officials again called on Somerville. This time to expand seating for the stadium, by then renamed Lambeau Field in honor of Packers founder Curly Lambeau. Thanks to Somerville’s forward-thinking design, the original bowl was left intact as seating was expanded to 56,263 and the stadium enclosure was completed. But with the legendary success of the NFL and Packers franchise, so came the demand for still more expansion.

As part of a sweeping $295 million renovation plan announced in 2000, Somerville once again returned to work on Lambeau Field. This time the firm teamed with Ellerbe Becket Sports Architects with the goal of transforming the stadium into a premiere NFL facility, while preserving the integrity and history of the original structure that had grown to become so hallowed in the hearts of fans. In addition to expanding seating to accommodate 73,128 fans, Somerville’s responsibilities included the addition of team administration offices, food service facilities, roofing systems, player fitness area, staff and player locker rooms, fan restroom facilities and an indoor concourse that could serve as a venue for year-round activities. With work completed, the stadium was rededicated in 2003, amid cheering throngs of awe-struck fans and Packer staff and players, both past and present. Like all who have donned the Green and Gold or simply cheered the team from the stands, Somerville is proud to have played a part in Green Bay Packer lore.

Beginning in 2013, Somerville worked with Elkus Manfredi Architects, providing construction administration support services for the expansion and renovation of the existing Atrium at Lambeau Field. The scope included supporting the efforts of expanding the Oneida Nation gate and promenade tailgate restrooms, expanding the team facilities including a new team entrance, dining, weight room and walk-thru gym, a new East Gate including new and renovated circulation paths with escalator/elevator additions and modifications, and core/shell spaces for a relocated Pro Shop, restaurant, and Hall of Fame. The project also included overseeing the site improvements, landscaping, re-grading and rebuilding of Harlan Plaza, the Oneida Promenade and improvements along Valley View Road.

In 2013, Somerville was hired to work with 555 International, incorporating the design documents into final construction documents for the new Packers Pro Shop at Lambeau Field (the NFL’s leading franchise apparel gift shop) and provided and coordinated all MEP, structural, code, permitting and construction administration support for the new location of the Packers Pro Shop at Lambeau Field.

In 2015, Somerville was hired by the Packers to design a full renovation of all east and west stadium suites and accompanying corridors, indoor club premium seating areas, the Legends Club, and all pre-function spaces (approximately 325,000 SF). Somerville’s design team worked hand-in-hand with Packers staff consisting of executive leadership, facilities, food service, marketing and the construction team from the very inception of the project through completion. From stadium precedent tours to computer generated renderings and full-scale, in-place mock-ups, Somerville lead the integrated design team through the process to ensure every last detail was considered. With purpose, we achieved the truly impressive outcome – a spectacular transformation of the historic facility.

relationship with the Packers